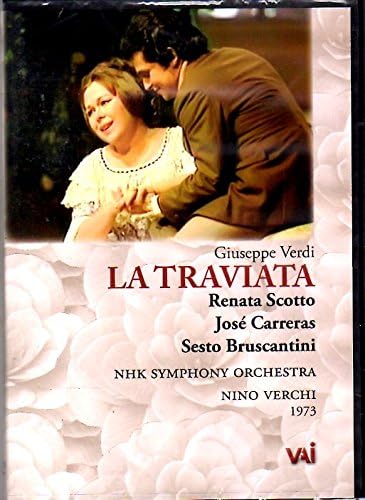 This DVD documents a 1973 live performance of La Traviata in Tokyo featuring Renata Scotto, an established star, and the young Jos� Carreras, at the start of his international career. Scotto was known for the intensity of her singing and the beauty of her voice, a necessary combination for anyone taking the role of Violetta. The first Act imposes major challenges for a soprano; she starts strong with some exciting hairpin turns in the drinking song, sensitive tonal shadings in the love duet, and many brilliant moments in the big scene from ネ strano through to Sempre libera, only some shaky coloratura marring the latter. From then on, she痴 in terrific form; the confrontation with the elder Germont crackling with tension, the party scene a study in pathos, and the final death scene sung with tragic dignity. Her acting is subtle too, though fans from her MET days will be surprised to see a chubbier singer than the diva they knew best. The young Carreras is an ideal partner for her, the voice a stream of golden tones. His phrasing is perceptive, conveying emotions clearly, softening his tone for love duets, forceful but never resorting to shouting in his anger. The veteran bass-baritone Sesto Bruscantini is a major plus for this production in the role of the elder Germont. His is a bigger, more forceful voice than one usually hears in the role, and he uses it with more color and verbal specificity than most baritones, helping to make Di Provenza sound less four-square than usual. Smaller parts are well-taken and Nino Verchi conducts efficiently, keeping things moving without offering any special insights. The same may be said for the video direction, blessedly free of too-tight closeups and nervous camera movements. Color and sound are fairly good, save for a touch of graininess. Sets and costumes are traditional and functional; after a while you don稚 even notice them, something one wishes could be said about some other productions. Stage direction is minimal; this is largely a stand-and-deliver performance. There痴 lots of competition in the La Traviata DVD universe, including such outstanding entries as the Covent Garden production led by Solti starring Angela Gheorghiu, a Los Angeles production starring Renee Fleming and Rolando Villazon, and a concept version from Salzburg notable for its leads, Villazon again, and Anna Netrebko. But true Verdians will always want multiple versions of favorite operas and Scotto and Carreras fans will want, nay, need this document of their younger selves. --Dan Davis

Renata Scotto, Jos Carreras, and Sesto Bruscantini star in this 1973 production of the Verdi opera with Nino Berchi conducting The NHK Symphony Orchestra.

学歴は重要なのか？ハーバードVSコミュニティーカレッジ (Does Your School Matter?)

ホログラフィック技術の未来 (The Future of Holographic Technology)